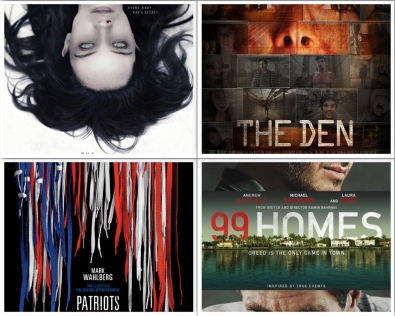 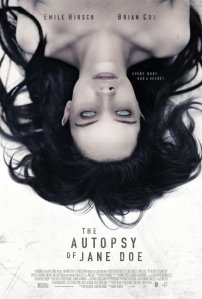 A father and son, both coroners, are pulled into a complex mystery while attempting to identify the body of a young woman, who was apparently harboring dark secrets.

Director André Øvredal follows up his 2010 hit Troll Hunter with this very cool horror flick, starring a solid lead duo in Brian Cox and Emile Hirsch. They play father and son coroners who receive a mysterious homicide victim with no apparent cause of death. As they attempt to identify the beautiful young “Jane Doe” they discover increasingly bizarre clues that hold the key to her terrifying secrets.

I felt this was a pretty unique movie, offering enough to keep me fully engrossed in what I was watching and suitably wary of the threat I knew had to be coming. I remember seeing Stephen King recommend this and that man obviously knows his horror, so I’m glad I followed his recommendation.

It’s good to see a low-budget horror film full of scares and blood, with enough questions to keep you trying to figure out what’s going on. Combined with a claustrophobic basement setting and great performances from our lead duo, this was another solid entry in the horror genre for 2016. The ending was the only real let down for me, I wasn’t fully sold on it and it lowered my overall score. I’m excited to see what director Øvredal does next, I just hope he doesn’t wait 6 years again to do it. 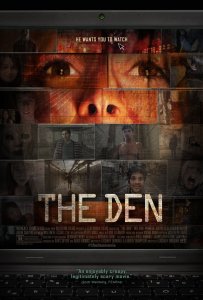 While studying the habits of web cam chat users from the apparent safety of her own home, a young woman’s life begins to spiral out of control after witnessing a grisly murder online.

The Den, or Hacked as it’s also known, is very much a modern-day horror thriller. Everything we see is shot on laptops or mobile phones and it never breaks from this method. It is a much more common gimmick these days, and most of the time its a frustrating experience for me as a viewer, but on rare occasions it does work. I would put The Den in the ‘works’ category, as there is a legitimate reason within this movies world why it’s all shown this way.

For something like this to work we rely heavily on the lead actor, and in this instance Melanie Papalia is up to the task. I found her to be engaging and watchable and she carries this movie well.

I remember reading good things about The Den on its release, and since it was finally on tv here in the uk recently, I’m happy to agree with the positive reviews. It was creepy, spilled a little blood and for me the biggest positive was that nothing was spoon fed to the viewer. It’s not without its faults, and as always with these kind of films you might need to suspend your belief with a few decisions Papalia’s character makes, but the movie flew by and I was impressed. It really feels like there is much more to this story but I’m not sure if we will be getting a sequel or not. I’d love to know more about those behind the cameras so to speak…..definitely more to be explored there. To say any more would venture into spoiler territory but this creepy horror/thriller is well worth checking out. 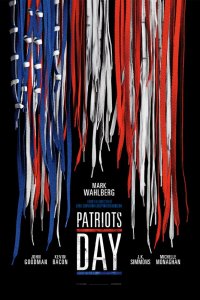 The story of the 2013 Boston Marathon bombing and the aftermath, which includes the city-wide manhunt to find the terrorists responsible.

Director Peter Berg assembled a great cast to tell this harrowing story. Mark Wahlberg, John Goodman, Michelle Monaghan, J.K. Simmons and Kevin Bacon to name but a few, even down to the guys playing the bombers who looked exactly like the real life brothers, that casting was spot on. The script was factual and the movie that plays out is true to life with a few embellishments thrown in to make it more of a big Hollywood action film.

Mark Walhberg’s character in this film, Tommy Saunders, is actually a fictional character created for the film, and is a composite of many Boston cops who worked the marathon and aided in the manhunt following the bombing. I love Mark Wahlberg, and as always he is highly watchable and puts in a great performance. Of course his character is always in the right place at the right time to catch the bad guys, but it has to work this way for the sake of this movie. I can see people having a problem with how the filmmakers implemented a fictitious cop and hailed him the hero. Of all of the real life figures who helped and persevered through this difficult time in the city’s history, they chose to depict someone who wasn’t actually there. I can understand that, and Wahlberg himself had reservations about doing the job, but for me it takes nothing away from the actual event.

The story shows how even minor characters were important in working as a team and ending the brothers threat. Everyday heroes and bringing people together, in this instance a whole city, and it can’t help but evoke an emotional response from us watching.

It’s wrong perhaps to say I enjoyed Patriots Day, but it was such a tense rollercoaster that even though we know how it ends, and what a tragedy the event was, I was enthralled in the film. Patriots Day in no way glorifies anything but it does show the men behind the bombing rather than shy away from it. How people can be so cold and ruthless aiming to kill and injure as many innocent people as possible is just incomprehensible.

Action packed, emotional and full of suspense, even if you know the story it’s well worth checking out Patriots Day. 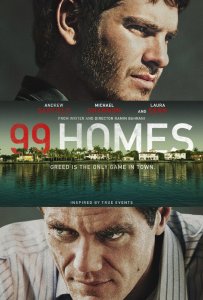 A recently unemployed single father struggles to get back his foreclosed home by working for the real estate broker who is the source of his frustration.

The trailer for this came on before something I was watching recently, and I’d never heard of it and normally skip the trailers, but something about this just held my attention and wouldn’t let go. So much so that I bought and watched this the very next day, and I’m glad I did. Starring Michael Shannon and Andrew Garfield, 99 Homes tells the story of a guy who just wants to provide for his family, and has to basically sell his soul to the devil in order to make ends meet.

After being evicted himself, Garfield’s character Dennis Nash has no other option to go and work for the man who evicted him and his family from their home, Shannon’s character Rick Carver. Basically leading a double life working for Carver and keeping it a secret, he has to do what was done to him and evict other families. Watching this knowing what he has been through himself was gut wrenching, but Nash needs the money and is ultimately led to believe greed is good. The film ended in the way I expected, yet I wasn’t let down by this, it seemed the most logical solution. There wasn’t a dull moment in 99 Homes, and it was as tense as any drama I’ve seen recently. Had I more knowledge of how the system works with houses in the US, I’d probably have felt even more attached to it. To me here in the UK the system seems so wrong and corrupt that this kind of practice can be legal. Yet the film is based on a real life father who exposed a corrupt real estate agent, and that makes it even more disturbing.

Shannon’s character is ruthless, and yet he is so god damn charismatic and watchable he elevates this movie. I’ve never really seen Andrew Garfield in too much, but here I felt for his character and the guy can act. He followed this up with lead roles in Silence & Hacksaw Ridge, so he is clearly on an upwards trajectory and I can see why. Both lead guys give fantastic performances, and I’m pleased to see so many positive reviews for the film and their performances. I’m just a little surprised and disappointed it didn’t make much money, this film deserves to be seen by a wider audience. 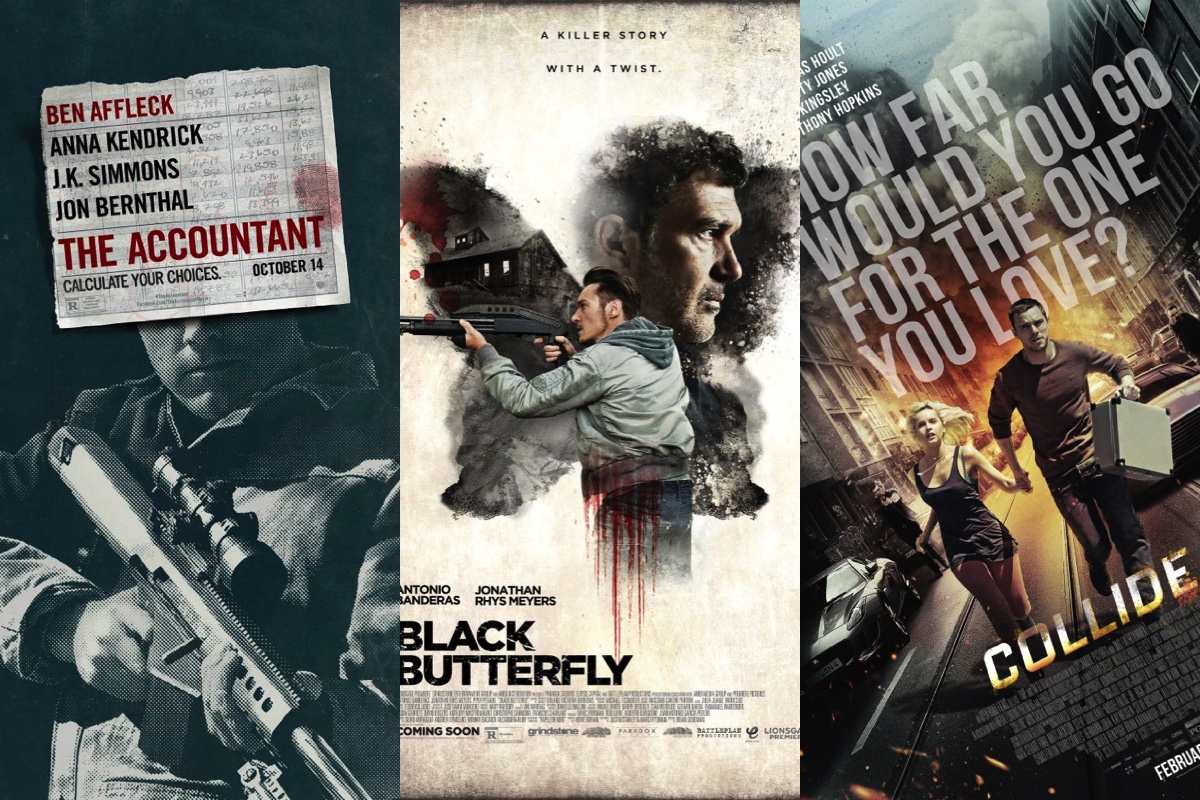 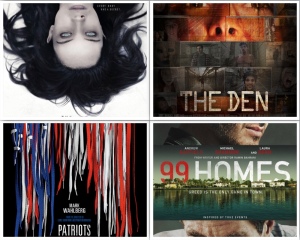 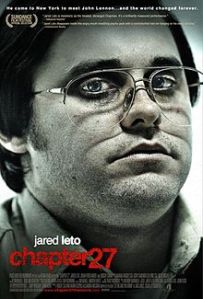 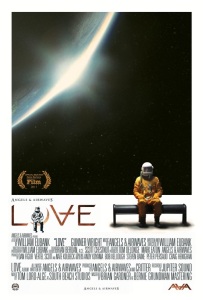 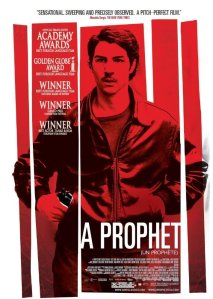